For decades, PNW gardeners have bucked our modified Mediterranean Climate by insisting to plant those plants more accustomed to softer, cooler climates with summer rainfall.  Climate change has accentuated our need to read more carefully the descriptions of plants we incorporate into our landscapes while realizing we can still have lively and lush inventories of plants whose life cycles and water regimens are better in line with the rainfall patterns, and temperatures, of the PNW
Plants for Sale:  Of course, Dan will bring plants!!  Payment by cash, check or credit card. 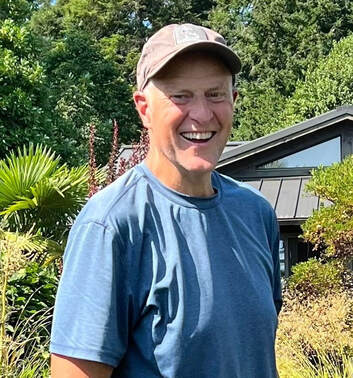 Dan Hinkley, born in the zone 4 highlands of North Central Michigan, has had a lifelong interest in all types of plants from trees to edibles, leading him to receive his B.S. in Ornamental Horticulture and Horticulture Education from Michigan State University in 1976 and his M.S. in Urban
Horticulture from the University of Washington in 1985.

While teaching horticulture at Edmonds community college, he and his partner, Robert L. Jones, began Heronswood Nursery, near Kingston, WA.  Devoted to introducing rare and unusual plants to gardeners of North America, this endeavor has led Hinkley over many parts of the world for the past 22 years.  Heronswood Nursery previously listed nearly 3000 plant species and has shipped world-wide.

After Heronswood closed in 2006, Dan independently focused his attentions on continued plant hunting, writing, speaking and plant research.  Dan has written articles and columns for a number of horticulture publications and has been featured on Martha Stewart Living and PBS Nova television programs.

His numerous books have received critical acclaim.  Dan's accomplishments have been recognized by many prestigious horticultural organizations with Lifetime Achievement recognitions.
He has received numerous medals in recognition of his contributions to horticulture education and practice and plant research.  He currently sits o the board of the Elizabeth C. Miller Botanical Garden.

Dan currently resides in Indianola, WA on a south-facing cliff overlooking Puget Sound.  He is creating his latest endeavor in the Gardens of Windcliff which include a large greenhouse, raised beds and a generous potager for research in edibles.  He is in the process of writing a third book in the Explorer's Garden series, a second book on the Winter Garden and a book on the Making of Heronswood.
Brought to you by: